The brother is cat sitting for a friend and invited me over to play with them. This one, Dusty, had to stay inside because he got attacked (they are outside cats) and is in the cone of shame :P But he was more than happy to rub against my leg and roll over for some scratching. Dusty is all grey, and such a pretty cat! I felt a little bad for him though because he really wanted to go out side. He kept going to the door and trying to nudge it open a crack. It was actually pretty hilarious/adorable when he would try to get his head into the corner but the cone would just hit it with a smack, and his head a good few inches away. There was a lot of clacking and mrow-ing. But he settled down a little for some pictures. I forgot my camera, so these are with my phone's camera. 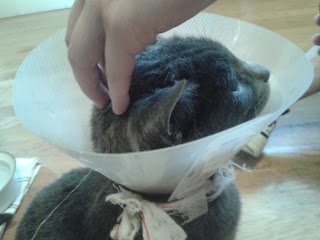 We were trying to get Dusty to stay still so The Brother could take a picture of the wound to send a progress report to Dusty's owner. I love the alert look. When you scratch is head though, he squeezes his eyes shut and sticks out his tongue. It is adorable! 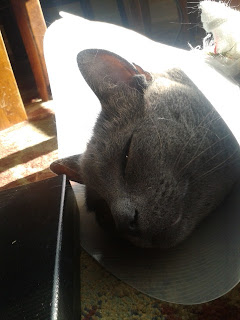 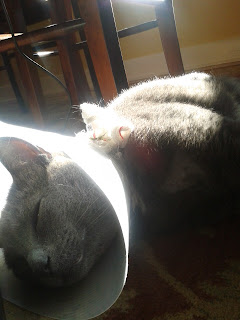 Kitty in the sun! 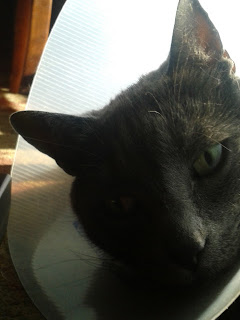 I thought this one was a bit defiant :)

I kind of want a cat now though! I think I might when I am alone and on my own. It would be a nice companion I could talk to. I'm just worried I'll get a demon kitty or something :P I want a friend to cuddle with. And I'm not too keen on their "presents" ;)