Hello! I'm in a great mood right now (as in this past hour, haha), even though things in my life are complicated and hectic right now....and add onto that, it's final's week!

But here are some pictures I was able to capture on my way to the last day of class on Friday! 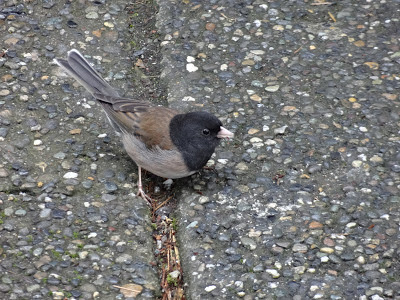 This bird was so quick, but it stayed still for just a moment so I could take a few pictures. I had another one that had a better composition, where the bird was facing the camera, and its body matched the line created by the line in the sidewalk, but it came out blurry :( Boo. Oh well, this one captured every detail of the bird, down to the gleam on its eye, which I thought was interesting too.

It was difficult to focus on the bird instead of the cement, so that was the challenge for this picture. Finally got one right! 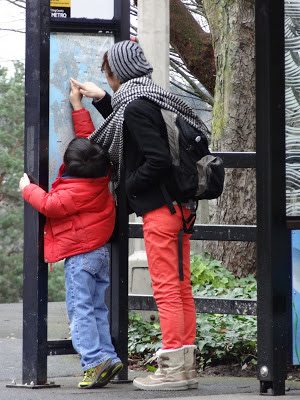 This picture was too good to pass up. This mother and her son were crossing the street to catch the bus, and I kept my eyes on them until I saw them approaching the bus map. Then I pulled out my camera and took a picture. I was going to walk away, when I decided to take one more, as I realized the boy was beginning to stand up on his toes to reach the same spot his mom was pointing at. I thought that the coordinating color of her pants and his coat, combined with the joined pointing was a great combination for this moment. I'm glad I took another shot because I like this one better than the first one!

Hope everyone has a great weekend!