Plants and animals at the Japanese Garden

Then today, it was so sunny and nice that my family and I went to the Japanese Garden to scope out possible plants for our garden. Unfortunately I left my extra camera battery in my dorm, so about halfway through our trip, my camera died :( But here are some shots I got off before the battery bought the farm :) 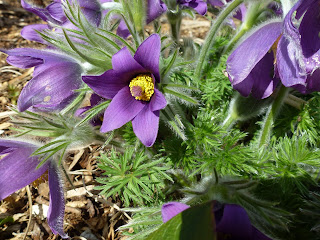 These beautiful flowers are such a deep and beautiful shade of purple.

While looking at this picture I notice the unfortunate shadows from the right, a problem due to the bright sunlight out. However, I do like how the sunlight lit up the fuzzy "hairs" on the stems. They create extra light to keep the picture from being too dark. 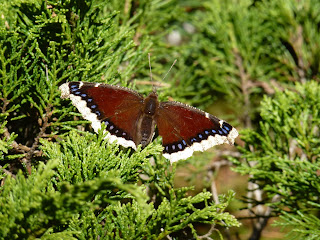 This butterfly was fluttering all around the Japanese garden. It stopped on a juniper bush near me, and I took a careful step forward and caught a picture when it relaxed its wings. I'm surprised how close I was able to get to it!

The sunlight in this instance really lit up the details and colors of the butterfly. The blue became quite prominent and popped among the black, brown, and white. 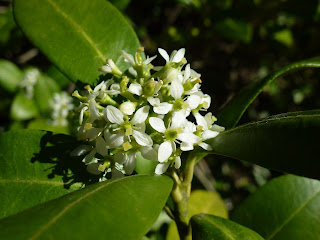 ver
This little bunch of flowers reminds me of a wedding, with the small tight bunch of white and the complements of green. I had to take this picture twice because the first time I couldn't get my shadow completely out of the picture. This second one turned out better though! I find it eye-opening how many different shades of green were able to be captured in this one picture. 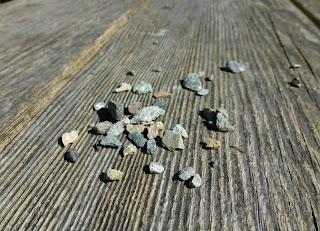 I saw this rocks on one of these benches, and liked the contrast of texture and color here. I don't know if you have ever made a rock rainbow, but I made them in Girl Scout camp in middle school. That is when I learned that there are so many more colors to rocks than just blue and gray, as evidenced above.

Once again, I was conscious about my shadow in the bright sun. I actually had to crop out a shadow in the top and bottom portion of the picture. I'll have to work on this! 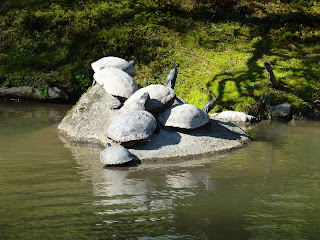 These are turtles crawling up onto a large rock by an island in the middle of the pond. I love the different parts of the picture; the muddy green/brown water, the gray rock, the bright scraggly line of turtle shells, the green moss... Also, usually as a rule of thumb, I observe the Thirds rule. For this picture, I positioned the turtles slightly above center. 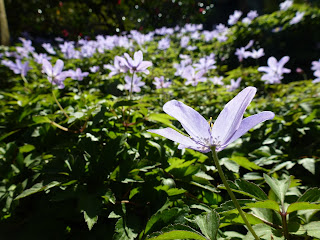 My dad likes Vinca minor, a crawling ground cover with periwinkle flowers. We found some, and I thought I would try a picture with the sun "lighting up" the flowers. I like the resulting effect, as well as the positioning of the single periwinkle flower in front with the sea of other out-of-focus flowers.


Hope everyone is enjoying the weather whether it is sun or rain or snow!
Posted by Kirsten at 12:29 AM