[A sort of planned] photowalk around campus #3

It was sunny today!! After participating in a psychology experiment, I took a walk in the last few hours of light (the sun still sets too early for me...). It wasn't really a photo walk because between classes I passed areas and objects (like the flowers and rain on the leaf) that I put in the back of my mind to take pictures of later. I like the check the weather every day so I can dress accordingly (yes, I'm organized like that), but it also helps me plan for taking photos (like if it's going to be dark or overcast all day, versus sunny). Anyways, enjoy the plethora of pictures to follow: 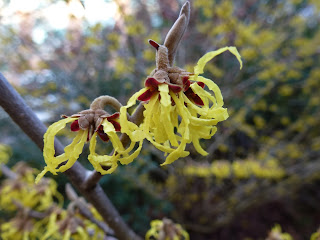 These yellow flowers are the single most acrid smelling plant I have found on campus. Of course, I haven't been in the greenhouse yet, haha. But there were about 2 or 3 tree-bushes of these that I pass on my way to two of my classes, and you can smell them before you see them. It's not a gross I-stepped-in-dog-poo kind of smell, but more of a this-is-really-strong-and-giving-me-a-headache smell. Due to this unfortunate side-effect, I couldn't stay around them too long taking pictures for fear I would pass out. However, what drew me to these, were that these are the only flowers I have seen on campus. Everything else is bare or dead. (This is why we need snow.)

The most difficult part of this picture was focusing on the "petals." (In quotes because I don't really know what they are.) They were so delicate and thin that it was difficult to focus on all of them at once with the depth of field. Even now, I think the brown part is a bit more in focus than some of the other petals. 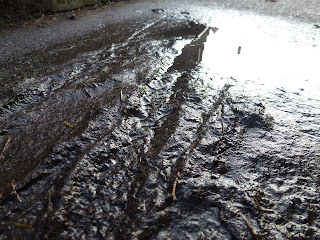 Did you really read all the way through this writing to the second picture?

Anyways, this is mud with a few bike tracks through it. I would have liked it to be a bit less washed out where the puddle of water was. Oh well, it add character, I suppose. I did like the slight reflection of a building, in the edge of the puddle though. But I think it's hard to tell that it's there. 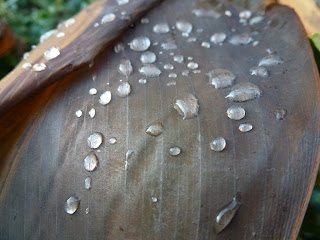 This shot reminds me of yesterday's. I think today's flora object is less interesting though. Oh well. I wanted to practice shooting water. I couldn't figure out which droplets looked the best in focus. This picture above has the droplets in the middle and bottom half focused. 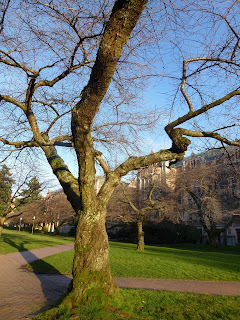 This is where it seamed into a regular photo walk. I really liked the light on the tree. I had to take the photo twice though, because my shadow was in the first one. 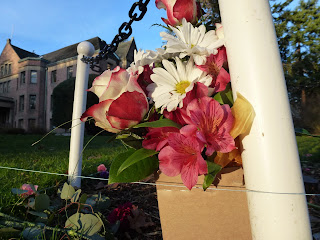 To celebrate the 100 years of connecting people (I think specifically with Native Americans), a tree was planted with flowers spread around. I took this photo of some of the flowers (also had a problem with my shadow in the setting sun) and I ended up liking the building in the background, giving some depth of field.
I also like the colors. 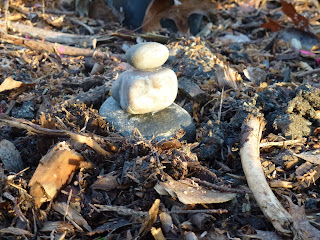 This cairn was next to the tree and flowers from above. Thought a close up would make it nature-y. I think the color palate is too grayscale, making it difficult to discern the cairn from the surrounding dirt and wood chips. But the sun made some nice shadows.

If you didn't actually read my descriptions, (but somehow read this), thanks for looking! Have a nice day. Please leave a comment so I know you visited :)
Posted by Kirsten at 8:44 PM