I don't know if I've mentioned this yet, but I love birds. There's something about them, and it's not in a symbolic wings = freedom kind of way. I just like the way they are. They are pretty and each species is so different from the others. I mean yes, they have their downfalls (doesn't everything)? They poop all over (enough to shut down swimming areas around here due to "contamination from waterfowl droppings"), the Canadian geese are pretty aggressive and used to chase little kids in a nearby city (I'm serious), and worse yet, the migrating geese refuse to fly in the pre-selected V-shape formation around here! :)

But birds are quite interesting creatures. I like how they walk, how they prepare for take-off and landing in water, their songs (okay, maybe not the cawing of crows and honking of geese...), when they fluff themselves up in the cold and look like a big ball of fluff with a beak....

So anyways, take a look at these birds from around campus! 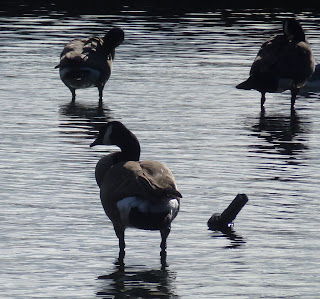 First, yes, Canadian geese. They always stand in and around Drumheller fountain when it's not on during the winter. Unfortunately, they poop everywhere. And they're loud. But on a nice day, they're a good break on the eyes from the overcast skies and gray sidewalks.

This picture was taken during a bright sunny day, so the light is a bit off, and the shadows a big dark... 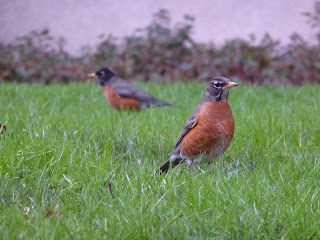 First robins of spring? In January (when this picture was taken)?

I like the vantage point here. I was trying to get to "eye level" of the robin, and took this picture right as he kind of "stood up" a little. 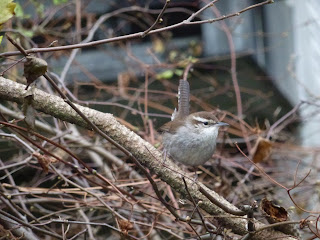 This little song bird was such a cheery sound last week. It was warbling a bit, and flitted around from branch to branch. I managed to take a picture while he was still for a few seconds :)

Unfortunately this bird is all earth colors on a branch, so it's hard to see. But hey, that's survival of the fittest, right? 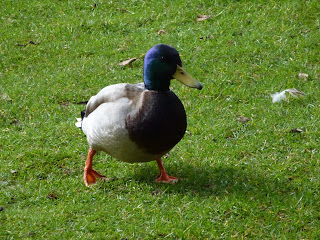 Like I mentioned, I like how birds walk, haha. Their waddle is kind of crazy and silly looking. There is no way you can take a duck like this seriously when it walks.

I really like the color of the head of this mallard duck (yay "All About Birds" badge from Girl Scouts!)