So, I'm a fencer. Just thought you should know :)

Yesterday evening, three people in my fencing school had their prize fight. They fenced all the other scholars (yes, every single one) who tested them on their fencing ability, their reactions to different circumstances, and their ability to stay calm and in form. It was a long event, starting at 4pm, and ending around 8:20ish. All three of them passed the test, received their white garters, and patch, marking them as official students of the Salle! I unfortunately don't have any pictures of the garters, but here are some pictures of the fencing! (And that's the important part, right?)

I also realized that I needed to clean the lens of my camera, so these pictures are not the best quality (darn...) But the good news is: I cleaned the lens! So hopefully the next round of picture will have less noise. Also, the prize fights were at an awkward time of the day for photography, where it's still daylight, but it's indoor with the bright lights in the Salle... 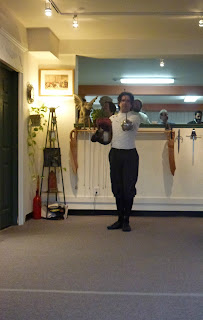 Steve, in Rapier, saluting. We do the formal salute, where you salute to the right (above), left, and then center. Also, Steve is a lefty. Those lefties are difficult to fence :) 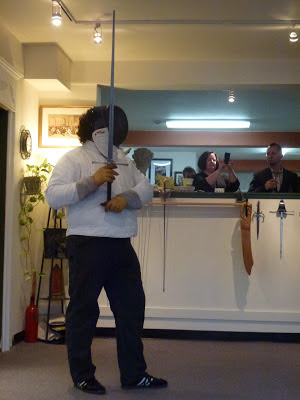 Josh in the neutral position in long sword, at the beginning of his bout with Jenny. 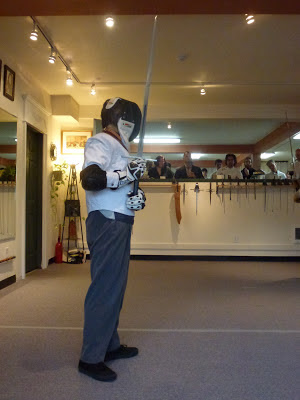 Jenny, who was the first to go for her badge in Longsword. 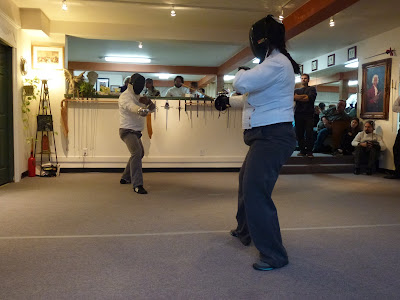 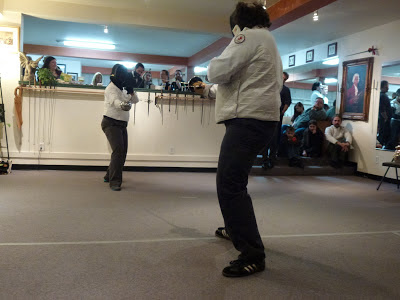 Rachel versus Josh. The thing about rapier is that you move all over the place in circles and far away, and close in. So you have to be careful when you're a spectator :) But part of fencing is that you have to be aware of your surroundings, and be courteous to the spectators so they don't get hurt. 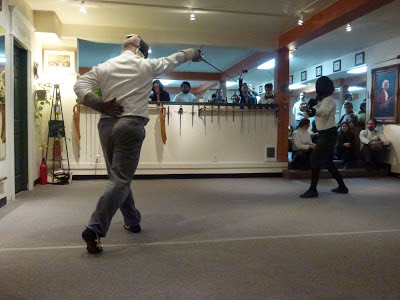 Steve fencing Brian in Rapier. Brian is really heavy handed, but fun to fence with (in my opinion). He makes you adapt on the spot, because he does weird things, haha. 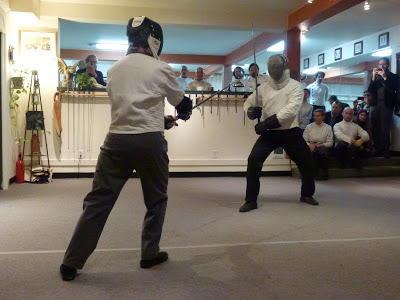 Jenny in longsword against Mr. Slocombe (I personally find him intimidating! He's really tall). I think he was testing Jenny on her ability to fence heavy handed opponents, but Jenny held her own, and was really relaxed and fluid in her motions, which was great. 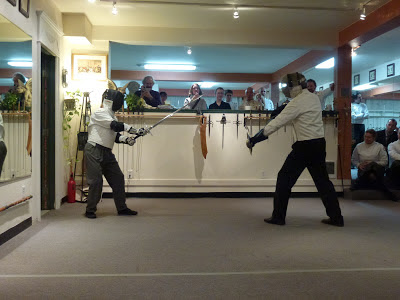 Jenny with longsword against Nathan (I think) who was using sword and buckler. One thing I like about historical fencing is that you can fight with different weapons, and it still works :) 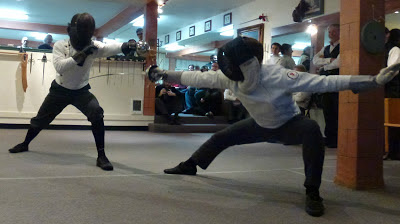 Steve against Ezra. Ezra is amazing and rapier is his thing, so he comes out with things like ^this^ that work, and you never saw it coming. But I really like this shot. I happened to be at the right place at the right time :) Too bad my camera doesn't like lights and had a dirty lens.... 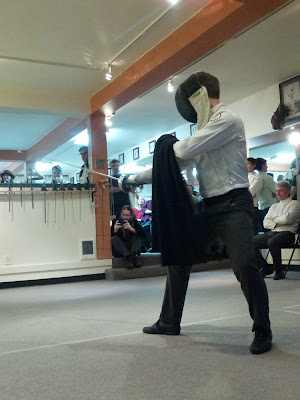 Also, Ezra likes to mix things up.
Meet Ezra. And his Cloak. 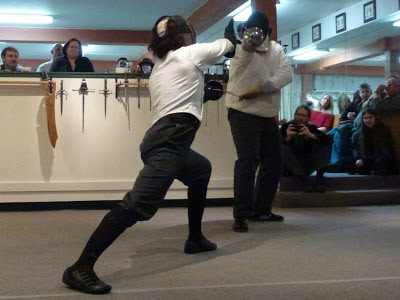 Steve getting a touch on Josh. He did what he was supposed to do, which is block the high line (with his hand), and attack the low line (which is now open).

I should mention, you can use your left (in Steve's case, right) hand to help you close the line of your defense. This is sort of another way that historical fencing is different than Olympic style fencing. 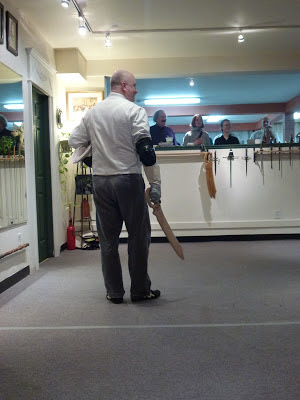 Brian really likes Dusack. It is basically a large wooden knife. He made all of the dusacks in our Salle (you can see them in the background hanging). 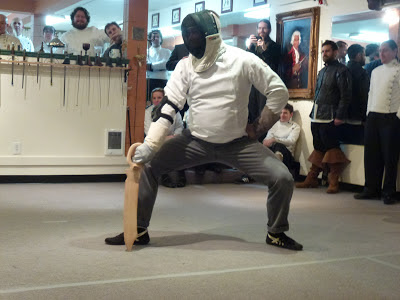 Honestly, this reminds me of a monkey...

So in part of testing the potential scholar, there are unconventional movements, stances, and actions. This is to test how you deal with them, as you would perhaps run into them outside of our fencing school. Normally though, we do not fence impractically. 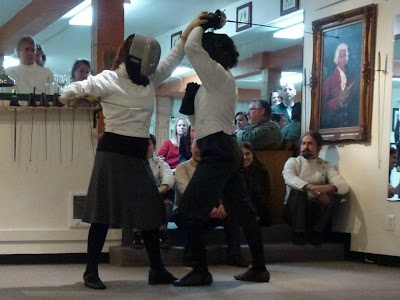 This is what happens when you piss of a woman :P
This is Torah with a small sword, fencing Steve. Again, you can use the left hand to bind the opponent's weapon, and stab them wherever you desire (as long as it's on the acceptable target).

Also, just a side note: Small sword is the best weapon ever :) You can tell what weapon I fence....


Congratulations to Jenny, Rachel, and Steve for becoming scholars!
Posted by Kirsten at 12:45 PM